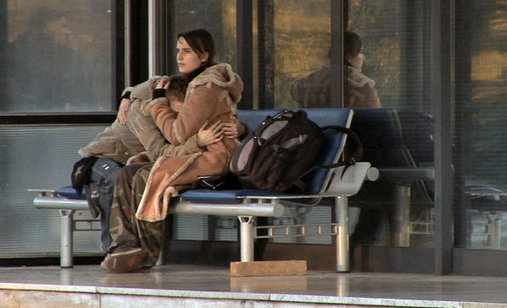 What it is that keep people together? ‘Sometimes she annoys me so much but I love her nevertheless,’ says Ratka about her lesbian partner Milka. ‘When I saw she could clean the house and iron clothes, I said, ‘she’s the one!’ says Vlado about his wife Marija, who, just like him, is mentally challenged. ‘I don’t know what he sees in me, I am not some looker’, admits Branka when asked about Krešo’s love for her. Hrvoje’s story is moving and full of hope – he is bound to a wheelchair and is not ashamed to go over the web pages of his favorite prostitute. However, what he really wants is a child. The responses of the protagonists of this documentary form an impressive story about this undeterminable and often illogical desire to ‘stay together’ despite everything.

Nenad Puhovski was born in Zagreb, where he obtained a degree in Sociology, Philosophy and Film Directing. He made his first film when he was 15. As a professional director, he has worked on over 250 theatre, film and TV productions. His documentaries focus on social problems and fine arts. In 1997 he founded Factum, which soon became the largest and most influential independent documentary production company in Croatia. He has produced over 60 documentary films that have been screened and awarded at international festivals worldwide. He has also won four Best Production Awards at the Croatian Film Days. In 2004, he founded ZagrebDox – the largest documentary film festival in the region – where he continues to serve as director. In addition to teaching in Zagreb, where he launched a new MA documentary program, he taught documentary film in many schools in Europe, Asia, North and South America, the Middle East and Africa. In 2009 he won the EDN Award for ‘outstanding contribution to the development of European documentary culture’.