Third Avenue: Only the Strong Survive 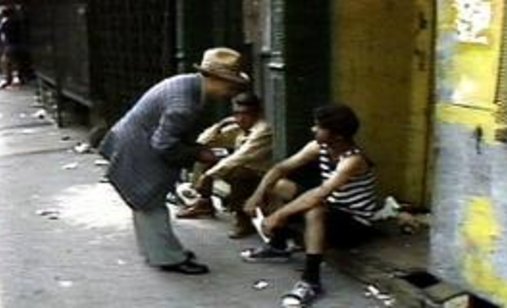 Winner of the National Emmy, this milestone cinemaverité documentary tells the stories of six ‘ordinary’ people who live or work along New York City’s Third Avenue, which runs for sixteen miles through Manhattan, Brooklyn, and the Bronx, cutting through the complex social strata of the city to reveal wildly different economic and ethnic subcultures. The subjects speak for themselves, offering candid glimpses into the disparate worlds of a junkyard dealer who steals cars, a Bowery bum and the wife he abandoned, a welfare mother living in a burnt-out building with her five children, a male prostitute, a God-fearing Puerto Rican factory worker, and an aging Italian barber and his wife.

Jon Alpert has distinguished himself as an award-winning journalist and a life-long educator and community activist. He has received eleven National Emmy Awards for news and documentary programs and founded the premier not-for-profit media education center in the United States, Downtown Community Television Center (DCTV) in lower Manhattan in 1972.

Between 1974 and 1979, Alpert co-produced five one-hour documentaries for public television. The earliest, entitled ‘Cuba: The People’, presented the first American television coverage inside Cuba in ten years. The New York Times selected Alpert’s work as one of the best television productions in the country that year. His 1977 award-winning piece on Vietnam, called ‘Vietnam: Picking Up The Pieces’, marked the first time an American TV crew had filmed in Vietnam since the war. In 1976, he won one of his three DuPont-Columbia Citations and The Christopher Award for his work ‘Chinatown: Immigrants in America’.

Alpert began contributing to NBC in 1979 with his coverage of the Vietnam-China Border Wars. Over the next dozen years Alpert’s investigative reporting, editing, and camera work earned an impressive string of awards and scoops. When Fidel Castro came to address the United Nations, Alpert and his team were the only non-Cubans allowed access to Castro. He was in China during the Tiananmen Square Massacre, and by posing as a tourist, reported from parts of the county off-limits to other reporters. Alpert’s Gulf War news reports won the Italian Peace Prize awarded by the President of Italy. He is the only reporter to have interviewed Saddam Hussein after the Gulf War. Altogether, Alpert’s work with NBC earned a total of seven National Emmy Awards, five Monitor Awards, the Clio Award, and the Gabriel Award. He remains the only Emmy-winning reporter to be also honored in the editing and camerawork craft categories as well.

In recent years, Alpert has worked with HBO to produce a series of investigative documentaries including ‘Lockup: The Prisoners of Rikers Island,’ which won critical acclaim and the highest ratings of any HBO documentary. In 1995, ‘High on Crack Street - Lost Lives in Lowell’ was hailed as the best anti-drug documentary ever made. It won Alpert’s third DuPont-Columbia Award. He was recently honored for with several Emmy Awards for ‘Baghdad ER’, an acclaimed HBO documentary that also won a George Foster Peabody Award.

Throughout these many global successes, Alpert has remained committed to DCTV and its mission of promoting strength and diversity in the media by empowering independent producers whose artistic or cultural roots are based in the community. DCTV’s programs for minority youth have transformed former drop-outs into student video champions winning an array of festival awards and honors. It is no wonder that the Mayor’s office called DCTV’s programs ‘the best in the City.’

Third Avenue: Only the Strong Survive