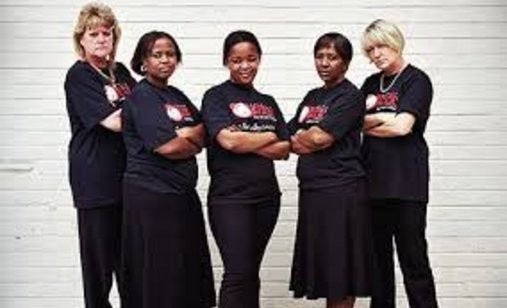 Fearless, feisty and resolute, the ‘Rough Aunties’ are a remarkable group of women unwavering in their stand to protect and care for the abused, neglected and forgotten children of Durban, South Africa. This newest documentary by internationally acclaimed director Kim Longinotto follows the outspoken, multiracial cadre of Thuli, Mildred, Sdudla, Eureka and Jackie, as they wage a daily battle against systemic apathy, corruption and greed to help the most vulnerable and disenfranchised of their communities. Neither politics, nor social or racial divisions stand a chance against the united force of the women. Once again Longinotto has managed to bring us an intimate portrait of change from Africa, this time from the new post-apartheid South Africa, a nation being transformed with hope and energy into a new democracy.

Kim Longinotto, born 1952, is a British documentary filmmaker, renowned internationally for her compelling human portraits and her sensitive and compassionate treatment of unknown topics. She studied camera and directing at the National Film and Television School in Beaconsfield, England, where she now tutors occasionally. Since 1976 she has directed, filmed and produced around 20 films. She is best known for known for her films Salma (2013), Sisters in Law (2005), The Day I Will Never Forget (2002) and Gaea Girls (2000) that won many awards at international festivals like Cannes, Sundance, IDFA and many other.ZagrebDox has screend many of her films in its various programs.