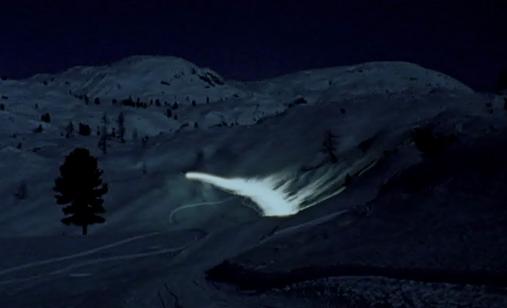 Accompanied by fragile sounds a few flocks of clouds hurry over the peaks of the Dachstein mountain range. Behind windows at solitary mountain stations, lights blink like Morse code. Gondolas flit past as if in flight. Thick blankets of fog envelop cliffs. A windmill spins. Here and there human figures appear, resembling phantoms in the snowy white. The moon climbs in the sky, glows, falls, disappears, then rises again. Elke Groen’s NightStill is a filmic survey of the Dachstein region in Austria’s Alps. However it has nothing in common with a documentary record, serving as a confrontation between the givens (a landscape, artifacts and living beings; the sky, weather and the light) and a film technique which has always possessed the ability to alienate.