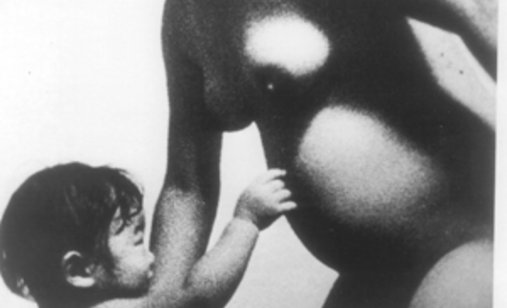 This is the second work by Hara Kazuo, who left a strong impression on the 1970s and 1980s. Takeda Miyuki, Hara’s former lover, left on a trip to Okinawa by herself, taking her children. Drawn by her letters, Hara heads for Okinawa and follows up on her life style. Takeda is living with a woman friend, who ends up leaving because of Hara’s presence. The camera then pursues, on the one hand, Takeda’s life after that point, recording her relationship with an Afrian-American soldier, her escape from Okinawa, and the birth of their inter-racial child, and on the other, the relationship between Hara, who is filming, and Kobayashi Sachiko, who is his assistant and producer, up to the point of the birth of their child. Here, the reversal of the filmer and filmed is exposed.

Hara Kazuo, born in Yamaguchi, Japan in 1945. Hara quit Tokyo Technical College of Photography. In 1972, he made his debut with ‘Good-bye CP’. In 1974 he made Extreme Private Eros: Love Song 1974. His The Emperor’s Naked Army Marches On (1987.) received the Caligari Prize at the Berlin Film Festival in 1987 and the Grand Prix at Cinéma du Réel. His most recent work is A Dedicated Life (1994). Since 1995, Hara has been head of Cinema Juku.