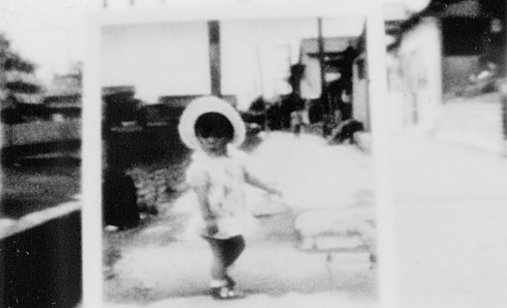 Naomi Kawase is searching for her father with whom she parted and lost contact soon after birth; therefore having no memory of him whatsoever. The film starts with her asking her adopted mother about her yet-to-see father’s whereabouts. The 8mm camera traces her father’s footsteps with his portrait 25 years ago and the record of the family register, the only clues to finding her father. Audiences are to be attracted by this intriguing force which combines her contradictory feelings; the fear of seeing her father, and the earnest wish to have the camera kept running. The visual representation of the trees, light and wind in Nara which made her as she is now, her presence as truth, not just a fact, brings audience dramatic impression, as if the soulful harmony which brings people together. This is the origin of Kawase’s film world.

Kawase Naomi, born May 30, 1969 in Nara, Japan, is a Japanese film director. Many of her works have been documentaries, including ‘Embracing’, ‘Katatsumori’ and ‘Tarachime’. After graduating from the Osaka School of Photography in 1989, he became the youngest winner of la CameÅLra d’Or award (the award for the best new director) at Cannes Film Festival in 1997 for her first 35mm film ‘Moe no Suzaku’. Kawase has completed production on her fourth full-length film ‘Mogari no Mori’, which won her the Grand Prix of the 2007 Cannes Film Festival.