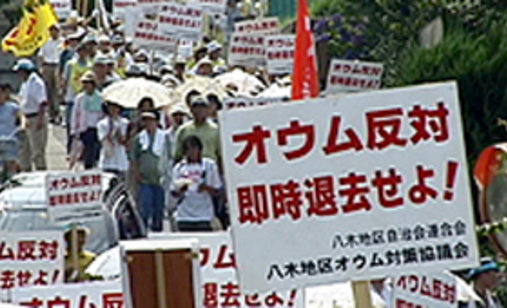 Sequel to ‘A’, the portrait of an Aum sect follower under attack in which Mori captured the dilemmas of the young deputy spokesperson of the Aum cult after leaders are arrested for the poison-gas terrorist attack in the Tokyo subway. In this sequel, Japan has gotten worst. The remaining cult members must deal with violent and absurd attacks from the media, police, ultranationalists, and local residents, their human rights endangered. Nationalism rises as the economy plunges and there are hysteric calls for legislature reminiscent of pre-war military Japan. Meanwhile, the camera discovers glimmers of a dialogue emerging between the ‘devil cult’ members and ‘peace-loving’ resident activists. Right-wing goons find their own alienation reflected in the Aum’s situation.

Mori Tatsuya is born in 1956 in Hiroshima Prefecture, Japan. Mori took part in filmmaking from the time he was a student. In 1987, he began working for a tv production company. His contract for a TV documentary on the cult Aum Shinrikyo was cancelled in mid-production because of conflict with the TV production company over his approach and perspective. Intended as a TV documentary, his work A turned into an independent film production and was released to international acclaim in 1998. Mori has made more than 40 TV documentaries and news reports on topics such as censorship in music, midget wrestling, and psychics, all from his own unique point of view, including ‘Broadcast-Prohibited Songs: Who’s Singing Them? Who’s Controlling Them?’, ‘Yodaka Star’ of 1999, and ‘Documentaries Lie’.