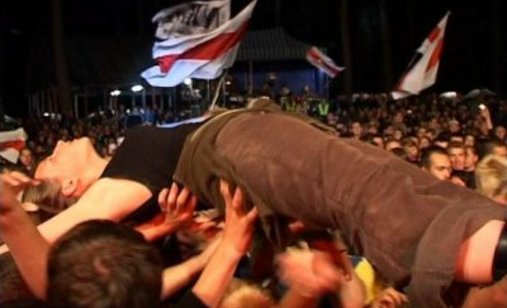 In his previous work, ‘A Lesson of Belorussian’, the Polish director Miroslav Dembinski used interviews with young people to make a documentary about president Aleksandr Lukashenko’s reign of terror in Belarussia. In ‘Music Partisans’ he elaborates on the theme, this time from the perspective of a number of rock bands. Through their music they try to touch on the problems in Belarussia. The musicians met each other in Poland, since protest songs are forbidden in Belarussia. The film ends with the elections of 2006 that, as was expected, ended in a victory for Lukashenko. Thousands of demonstrators, including the musicians, gather at October Square, but after a few days they are arrested with force. In jail, however, they will not let them take away their ideals. Here, the protest songs simply continue. ‘If you’re afraid, nothing ever changes.’

Mirosław Dembiński is born in 1959 in Bydgoszcz. In the years 1977-81 he participated as an actor and director in the students’ theatrical movement. He graduated in mathematics from Mikołaj Kopernik University in Toruń and in Film Directing from the PWSFTViT in Łódź. Mirosaw Dembiski is very productive as an author with many documentary stories behind him.