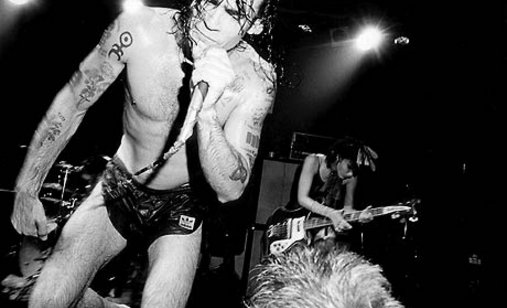 Based on Steven Blush’s ‘American Hardcore: A Tribal History’, the film expertly chronicles the brief history of hardcore punk rock in America, from 1980 - 1986, weaving rare concert footage with interviews and other archival and current-day material. ‘American Hardcore... is not a music documentary but rather a piece of American subcultural history,’ Rachman told once. This was a kids’ movement that spread throughout the suburbs of America at a time when Ronald Reagan was sweeping the country with conservatism. Film speaks about how kids back then raged their anger through music that not only was punk rock but was a message about their frustration to how America was changing. Rachman draws on amazing footage of scene leaders such as Bad Brains, Minor Threat, and Black Flag to tell the story, and splices them with interview clips from band members, scenesters, fanzine writers, label bosses, and plenty of the freaks and misfits who were drawn to the pummeling sounds of hardcore.

Paul Rachman, born New York, July 14, 1959, is an American film director and one of the founders of the Slamdance Film Festival. He began his film career making underground hardcore punk films and music videos and quickly became one of the of the industry’s top music video directors. He has also directed several award-winning short films and made a feature film directorial debut in 2000 with ‘Four Dogs Playing Poker’ starring Forrest Whittaker, Tim Curry and Olivia Williams.