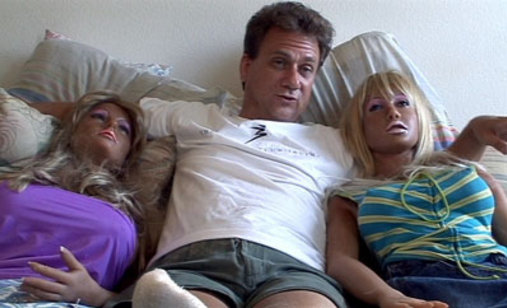 'Guys and Dolls' is an intimate portrayal of loneliness and exclusion. Filmed and directed by first timer, Nick Holt, it introduces four men who have been unable to find a partner in life. Instead they have life size, anatomically correct, silicone dolls. The relationships they have formed with these dolls are equally, if not more, tender and caring than could ever have been possible with real life counterparts. One Michigan man confides that his favorite way to spend time with his girl is ‘not actually having sex, but just lying next to her and appreciating her, especially in the really early morning light. Just being able to see her looking at me and regarding me.’ A Texas man owns eight dolls, and when he suggests to his flesh and blood girlfriend that she take a place at the table beside his silicone girlfriends, she readily accepts the invitation. ‘Guys and Dolls’ tend to show us that despite what the rest of the world may think, there is always hope, and ‘love’ can conquer all.

Nick Holt is a British director and Guys and Dolls is his first documentary TV film.

Produced by:
North One Television