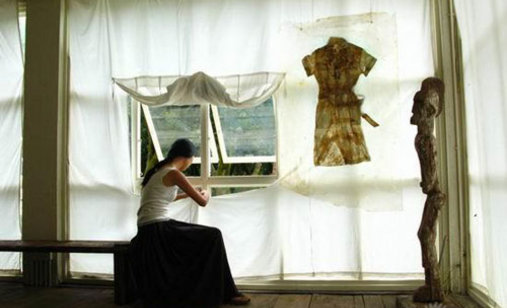 The film shows the fashion industry’s labourers, workers populating the vast, neon-lit factories, often competing – in a titanic effort – with the efficiency and precision of machines. And we meet small-scale artisans uneasily waiting for the new economy’s laws to sweep away their craft and force them to look elsewhere for a means to support themselves: maybe a coalmine, maybe a taxi.... Useless also portrays the industry’s creators, some of today’s most exquisitely accomplished and innovative designers. Ma Ke is the design director of the Chinese clothing brand Exception – one of the few remarkable local fashion labels. Earlier this year at Paris Fashion Week, she presented her new brand, Wu Yong (meaning ‘useless’), intended more as a conceptual work of art than a pręt-ŕ-porter line. Rooted in Taoism, her design philosophy combines groundbreaking ideas with handwoven materials and amazing feats of manufacturing. Harmoniously weaving the disappearing old and the vital new into a visual texture of great impact, Jia both informs and seduces as he portrays the unknown faces of changing China.