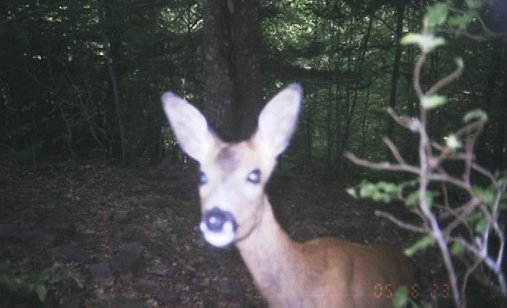 Driving her camper which she has nicknamed Elvis through the Spanish Pyrenees, filmmaker Astrid Bussink comes across a small village where a man named Santiago has taken the rap for the assassination of the mayor. But rumour has it that the entire village was behind the shooting. Astrid learns Spanish to facilitate communication with the villagers, but people refuse to talk to her and all doors are closed. Instead, she gets suggestions for all sorts of alternative documentary topics: the village women’s troubles with their horrible husbands, a group of nuns, the lousy food supply, or the bear named Camille - so far, the forest ranger has only seen its tracks. Astrid realises that she, just like the ranger, is pursuing a ghost, so she gets into her camper and heads for new adventures.

Astrid Bussink, born Eibergen, 1975, studied several disciplines at the Academy of fine Arts, AKI in Enschede. She graduated with a project consisting of an art magazine and organisation ‘Het Ei’. She studied the technical aspects of filmmaking at Open Studio in Amsterdam. To deepen her knowledge and ideas she consequently did a Masters in Film at the ECA. During this master she stayed in Budapest to shoot her first documentary ‘The Angelmakers’. Since then she filmed ‘Rückenlage/Upside Down’ (2006), ‘The 9 Lifes of My Car’ (2006), ‘The Lost Colony’ (2007).