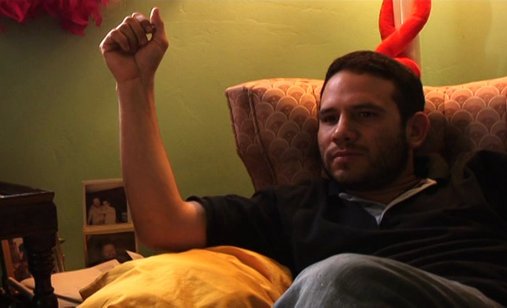 Director Richard Rowley is a member of the Big Noise Tactical Media Group, a New York-based radical group that makes a contemporary form of guerrilla documentaries and reports. In ‘Deserter’, he follows Ryan Johnson and his wife Jen during their flight from the Central Valley of California to Toronto, Canada. Johnson deserted the American army after hearing that he was going to be deployed to Iraq, despite assurances that this would not happen. Like many of his contemporaries, Johnson only joined the army because he could not find a job, and he sees the war in Iraq as both illegal and immoral. Desertion means imprisonment, so he decides to flee, realising that there will be no way back. Johnson seeks advice from various helpful organisations that guide him and Jen to Canada. The employees include both Vietnam veterans and young soldiers who have already served in Iraq. Deserter plainly shows how the war in Iraq poses a dilemma for young and inexperienced people.

Richard Rowley is a director, cinematographer, editor, born in 1975. Author of multiple award-winning documentary features including Fourth World War (2003) and This is What Democracy Looks Like(2000). His shorts and news reports are also regularly featured on and commissioned by leading outlets including Al Jazeera, BBC, CBC, CNN International, Democracy Now!, and PBS. Rowley has been a Pulitzer Fellow, Rockefeller Fellow, a Jerome Foundation Fellow, and a Sundance Documentary Film Program Fellow.