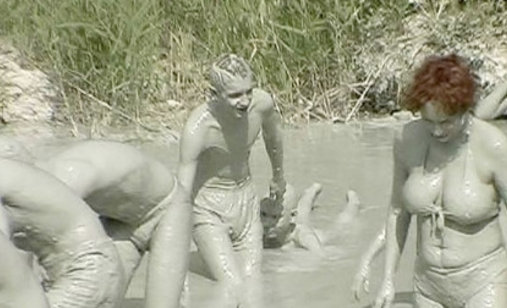 According to a drunk, middle-aged woman who always wanted to be an actress, ‘Happiness is when someone understands you, when someone loves you’. Her equally inebriated boyfriend is so jealous that he smacks her time and again. Director Alexander Rastorguev follows the tragicomic couple during their summer holiday by the sea. But he also directs his camera at other seaside visitors, like the man earning a living on the beach with a camel, a young womaniser, and a dwarf getting married to a young woman. They are all spending the summer on the eastern coast of the Black Sea. Rastorguev observes man in all of his manifestations: fat, thin, young, old, drunk, dancing, singing, having sex and bathing in mud or in the sea. Even President Putin makes an appearance, clad in casual clothes. Quite a few fortune-seekers at the resort get caught up in a daily carrousel of sex, booze and aggression.

Vitaly Mansky was born in 1963 in Lviv, Ukraine. He moved to Russia, where he lived during the breakup of the Soviet Union, today he resides in Latvia. He is the founder of Russian documentary festival Artdocfest. As a filmmaker, he is known for the award-winning documentary features: Putin’s Witnesses (2018), Close Relations (2016), Under the Sun (2015), Pipeline (2013), Motherland or Death (2011). Many of his films were screened at ZagrebDox programs with Pipeline winning the Movies That Matter Award. Gorbachev. Heaven (2020) is his latest film.