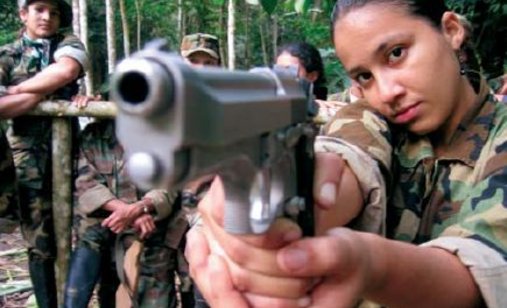 The Danish director and his crew managed to enter a camp of Columbian revolutionary guerillas (FARC), hidden deep in the jungle. There they witnessed the training of a 21-year-old girl-recruit for militant anti-regime activities. Having decided to join the revolution, the girl had to say goodbye to her family, her boyfriend, her friends, and regular hygiene. She had to learn various skills, such as slaughtering a cow. Despite all the obstacles, Isabel is determined. The film shows the process of her painstaking adaptation.

Frank Piasecki Poulsen is born 1975, Denmark. Graduated from the National Film School of Denmark, 2001. Worked as director, photographer and scenarist, primarily for the national broadcaster DR. Poulsen is well travelled, especially in Africa. In the making of ‘Guerrilla Girl’ (2005), Poulsen lived in a FARC training camp for three months. The film attracted worldwide interest, was showcased at IDFA’s First Appearance programme, at CPh:DOX, AFI’s Silver Docs, Havana and Sheffield, as well as at One World human Rights Festival, Prague. ‘Blood in the Mobile’ (2010) was screened at IDFA’s Feature-length Competition.